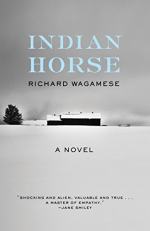 Richard Wagamese
This set of Lesson Plans consists of approximately 139 pages of tests, essay questions, lessons, and other teaching materials.

Write a poem about one of the issues or events from Indian Horse.

Make a list of 5-7 songs you would use in a soundtrack for a movie of Indian Horse. Include an explanation of what scene each song would accompany and why.

Write a one-page book review for the novel Indian Horse.

Imagine Saul kept a journal, and write 5 journal entries you might find there based on his character. Write an entry for 5 separate, significant scenes in the novel.

Select a vivid scene from one of the events...