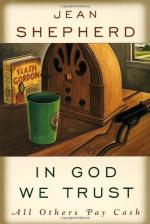 In God We Trust, All Others Pay Cash Test | Mid-Book Test - Medium

Jean Shepherd
This set of Lesson Plans consists of approximately 158 pages of tests, essay questions, lessons, and other teaching materials.

1. How can kids figure out the secret message on the radio show?
(a) By listening to the program every day.
(b) By using a special decoder pin.
(c) By sending in a postcard.
(d) By knowing a secret language.

3. What fascinated Ralph's father in his spare time?
(a) Working.
(b) Reading the newspaper.
(c) Puzzles and contests.
(d) Fishing and cooking.

1. Ralph describes his date as:

2. How does Ralph's mother feel about the "major award"?

3. How does Ralph get down?

4. How did Ralph obtain membership in the secret club?

5. Why is Ralph disappointed when he finally figures out what the secret message reads?

1. What does Ralph believe exists inside every male child?

2. Why is Ralph's encounter with the woman at the Automat so important to the story?

3. How does Ralph's mother react to the fight?

4. How important was the "major award" to the Old Man?

5. Why is Ralph's life changed forever after the jawbreaker incident at Pulaski's store?

6. What does the reader learn about the main character in the opening chapter?

7. What have we learned about Ralph and his desires in the first eight chapters?

8. Why were the movie night contests so important to the people of Hohman?

9. Why does Ralph go looking for a book in his parents' room?

10. Why is Ralph paralyzed with fear when he reaches the top of Magic Mountain?

More summaries and resources for teaching or studying In God We Trust, All Others Pay Cash.

In God We Trust, All Others Pay Cash from BookRags. (c)2022 BookRags, Inc. All rights reserved.