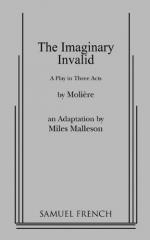 Molière
This set of Lesson Plans consists of approximately 109 pages of tests, essay questions, lessons, and other teaching materials.

2. To whom does Argan promise Angelique's hand in marriage?
(a) Beline.
(b) Mr. Fleurant.
(c) Cleante.
(d) Thomas Diaforus.

4. Who tells Angelique that Beline is conspiring against her?
(a) Thomas Diaforus.
(b) Cleante.
(c) Mr. de Bonnefoi.
(d) Toinette.

1. What is the name of the person that beats Louison?

3. Who initially thinks Angelique's arranged marriage is the wisest thing Argan's ever done?

4. What is the relationship between Mr. Purgon and Mr. Fleurant?

5. What does Argan think of the gypsy song?

1. In Act 3, Scene 12, how is suspense used as a plot device when Toinette returns as herself, after appearing as the doctor?

2. How is foreshadowing used in the announcement of the arrival of Thomas Diaforus?

3. How does Toinette affect Angelique's discovery of her fathers death?

4. How can we tell that Louison is loyal to Angelique?

5. In Act 3, Scene 18, in addition to the discovery of Beline's motives, what other information is revealed about her marriage to Argan?

6. How does Moliere use the diagnosis of Argan to express an opinion on doctors?

7. How does Beline's reaction to seeing her husband dead affect Argan?

8. Explain how the plot element of secrecy is introduced in Act 1, Scene 3.

9. How is Argan's belief that he is an important man reinforced by the new doctor's appearance?

10. How does the title of the play influence the audience's initial perception of Argan?

More summaries and resources for teaching or studying The Imaginary Invalid.