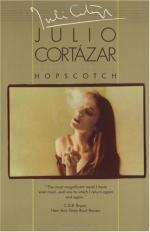 Julio Cortázar
This set of Lesson Plans consists of approximately 127 pages of tests, essay questions, lessons, and other teaching materials.

The members of the Serpent Club spend many nights at Ronald and Babs' flat listening to their favorite jazz records. Spend a class period doing the same to give students a feeling for the rhythm and tone of the jazz the Club would listen to. Perhaps, leave these jazz standards on as ambiance as you discuss the novel.

A Tour of Paris

Much of the first book of Hopscotch contains detailed descriptions of the neighborhoods in Paris where La Maga, Horacio, and the rest of the Serpent Club spend their hours. Make a list of these places as you read and look them up on Google's street view to see what they look like today.

Horacio spends much of his first day in Pola's flat looking at her mural of postcards, pictures, and newspaper clippings. Have every student in class create a similar mural...