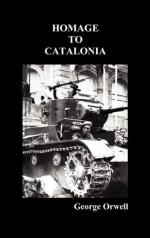 George Orwell
This set of Lesson Plans consists of approximately 93 pages of tests, essay questions, lessons, and other teaching materials.

He originally traveled to Spain as a journalist, but was caught up in the revolutionary spirit of Barcelona and joined a local militia unit to fight against the Fascist forces being led, by that time, by General Francisco Franco. He is assigned to a POUM militia unit and serves for several weeks at the front. He is then transferred to the 29th Division, another POUM unit, where he serves for several months with other English soldiers.

The book opens with a description of one of these men. The man is standing in front of an officer, reading a map. He's about 25-years-old and in good physical condition. Orwell sees in the man's face a kind of personification of friendship and senses a great kinship in him.

He commanded a small contingent of troops on the Canary Islands in virtual exile...

More summaries and resources for teaching or studying Homage to Catalonia.