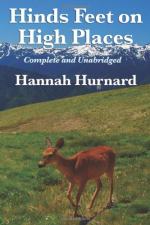 Hannah Hurnard
This set of Lesson Plans consists of approximately 187 pages of tests, essay questions, lessons, and other teaching materials.

1. After Much-Afraid took a walk alone on the Shores of Loneliness and her enemies showed up again, what did Much-Afraid do?
(a) She tried to climb down, but couldn't.
(b) She tried to push them over the edge.
(c) She picked up more rocks to throw at them.
(d) She jumped over them when they came at her.

2. Just when she realized how impossible it would be to climb the mountain, what did Suffering point out?
(a) An eagle flying overhead.
(b) A sign showing them the way up.
(c) A buck, followed by a doe, climbing up the mountain.
(d) A rabbit climbing up a trail.

3. What happens when Much-Afraid begins to have doubts about the journey to the High Places?
(a) The thorn pricked her heart.
(b) All the answers are correct.
(c) She said she would trust the Shepherd and do as He wants.
(d) Tears began to prick in her eyes.

4. What did Much-Afraid and her companions find as they drew closer to the mountainside?
(a) It was a steep impassable precipice.
(b) The mountain was the tallest they had ever seen.
(c) They were going to need mountain climbing equipment.
(d) There were several paths, but no sign of which one to take.

7. What made the Fearlings finally leave Much-Afraid's cottage?
(a) The threat that the Shepherd would be called.
(b) The threat they would be arrested.
(c) They were tired of picking on her.
(d) The fear they killed Much-Afraid.

9. What does the Shepherd say about bread corn?
(a) It is the most difficult grain to thresh.
(b) It is only good to feed animals until it is threshed.
(c) That although it is bruised, no one threshes it for ever.
(d) It tastes good when it is baked into corn bread.

12. As she faced the precipice, what was the assault on Much-Afraid from her family?
(a) Pride and Self-Pity told her she was better off at home.
(b) Resentment insisted she should be angry with the Shepherd for tricking her.
(c) Discouraging words, insisting she had been a fool to believe the Shepherd.
(d) The entire family trapped and bound her.

13. As she sat exhausted at the foot of the precipice, why didn't Much-Afraid want to call the Shepherd even though Sorrow and Suffering wanted her to?
(a) She preferred cringing and crying.
(b) Because he would only tell her to build another altar and she couldn't.
(c) She was tried of depending on him.
(d) Because he probably wouldn't come because she called him so often.

14. When the Shepherd responded to Much-Afriad's call for help with Bitterness in Chapter 8, what did the Shepherd tell her to do?
(a) "Oh Little One, once again you don't trust me."
(b) "Build another altar, and lay down her will as a burnt offering."
(c) "Continue on the path I have chosen for you."
(d) "Remember my promise."

15. Although Much-Afraid agrees to go with the two strange women the Shepherd has chosen for her traveling companions, what won't she do?
(a) She won't walk beside them.
(b) She won't talk to them.
(c) She won't look at them.
(d) She won't hold their hands.

1. Why was Pride chosen for his designated task in the chapter, "Encounters with Pride"?

2. How did the Shepherd leave Much-Afraid and her companions as they started their journey to the High Places?

3. Why didn't Mrs. Valiant admonish Much-Afraid for being frightened?

4. What did the four people from home do that frightened Much-Afraid on the Shores of Loneliness?

5. Who raised the orphaned Much-Afraid?

More summaries and resources for teaching or studying Hinds' Feet on High Places.