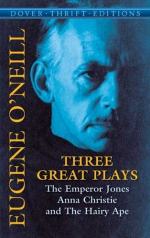 • Scene one is set in the forecastle of a transatlantic oceanliner. The sailors, described as rough and rowdy, are sitting up in the bunks drinking and chatting.

• The main focus of the scene is a character called Yank. Yank is strong and is feared and respected by the others because of his temper and physical power.

• An elderly Irish man called Paddy sings a song about Whiskey. The other sailors join in until Yank asks them to quieten down. He tells them he is trying to think.

• When Yank tells the sailors the ship is their home, a British sailor called Long disagrees. He tells him the upperclasses keep them cooped up like animals. He is shouted down by the other sailors and Yank threatens to beat him up.

• Paddy gives a long speech about the joys of being at sea. He says the sailors ought to...