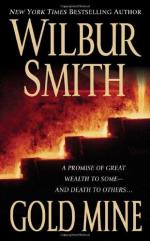 Wilbur Smith
This set of Lesson Plans consists of approximately 118 pages of tests, essay questions, lessons, and other teaching materials.

This quiz consists of 5 multiple choice and 5 short answer questions through Chapters 16 - 20.

1. What does the person watching Rod leave the Steyner house do for a second time?
(a) Wash hands.
(b) Laugh.
(c) Write furiously.
(d) Pray.

3. Who is is one of the richest and most influential men in Africa?
(a) Kowalski.
(b) Steyner.
(c) Hirschfield.
(d) Allen.

1. What is the nickname given to one of the richest and most influential men in Africa by the man who built his office?

2. In what city does one of the richest and most influential men in Africa live?

3. Who summons Rod to come to his house after the death of the general manager?

4. Who is the General Manager of The Sonder Ditch Mine found underground?

5. How many men are missing in total in the mine?

Gold Mine from BookRags. (c)2021 BookRags, Inc. All rights reserved.