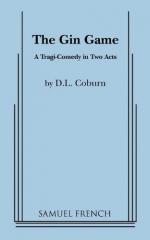 5. What kind of work did Fonsia do before retiring?
(a) Teacher.
(b) Accountant.
(c) Secretary.
(d) Apartment manager.

7. According to Fonsia, why does she acquiesce and play a game of gin in Act 2, Scene 1?
(a) Because Weller would only pester her until she played.
(b) Because the Sunshine Ladies were running late.
(c) Because it might shut Weller up.
(d) Because she didn't want to interact with the Extended Family.

9. Why does Fonsia discard a Jack in Act 2, Scene 1?
(a) Because Weller citicized her for holding too many face cards earlier.
(b) Because she doesn't need it.
(c) Because she hoped to close the game with the next hand.
(d) So Weller can win a hand.

12. When is lightning used in the final scene of the play?
(a) When Fonsia makes true statements.
(b) At the end of statements made by Weller.
(c) At times of dramatic physical action.
(d) At the beginning and end.

13. How did Weller find himself in this Home?
(a) Himself, by giving them the last of his savings.
(b) Weller was placed in this home by the Welfare Department.
(c) He had to beg them to take him now that he was out of money.
(d) His sons placed him in "this cheap home."

14. What confession does Fonsia make to Weller towards the end of Act 2, Scene 2?
(a) That she did turn him in to the nurses.
(b) That she is also on welfare.
(c) That she did cheat at gin.
(d) That her son does hate her.

1. In Act 2, Scene 2, how does Fonsia drive home the example of Weller always having to be 'the victim of bad luck,' as opposed to accepting his mistakes?

2. In Act 2, Scene 2, what does Weller accuse Fonsia of doing by coming out to the porch when she knew it was a ruse?

3. What are Weller's final words of the play?

4. When it comes to men, Fonsia admits that she's been what?

5. What exclamation by Fonsia does Act 2, Scene 1 end with?

More summaries and resources for teaching or studying The Gin Game.