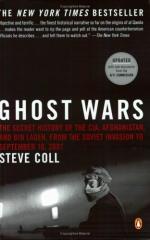 Steve Coll
This set of Lesson Plans consists of approximately 138 pages of tests, essay questions, lessons, and other teaching materials.

1. When the foreign oil representatives arrived in Afghanistan, why would Mullah Omar not meet with them?
(a) They did not have full beards.
(b) They were not Afghans.
(c) They were not Taliban.
(d) They were not Muslims.

1. When had the White House counterterrorist group grown frustrated with intelligence reports on bin Laden's whereabouts?

2. Argentine oilman Carlos Bulgheroni had the same idea as Unocal and had whose support?

3. On 7 August 1998 a devastating terrorist attack against U.S. embassies took place in which two African capitals?

4. Sudan was told the Khartoum embassy would close given their terrorist support, but what was one step it could take?

5. According to Chapter 26, Kahlid al Mihdhar and Nawaf al-Hazmi met in which capital?

1. How was bin Laden described as having viewed himself in Chapter 21?

2. How was Unocal introduced?

3. Why was it the CIA's working idea to attempt to keep bin Laden outside "KKJ"?

4. Why were Clarke and his counter-terrorism group at the White House frustrated by late spring in 2000?

5. Why was autumn in 1999 rough for managers at the Counterterrorist Center who were reporting possible terrorist threats?

6. What plan was agreed to between Pakistani intelligence director Naseem Rana and CIA station chief Schroen regarding the capture of Mir Amal Kasi?

7. What MiG fighter jet intercept mission of a CIA Predator drone was described in Chapter 29?

8. Why was Nawaz Sharif in fear of his army?

9. Why was George J. Tenet in various ways an unlikely candidate capable of repairing the breach between the CIA and Clinton?

10. How did the Taliban take their final major prize taken in northern Afghanistan?

More summaries and resources for teaching or studying Ghost Wars: The Secret History of the CIA, Afghanistan, and Bin Laden,.

Ghost Wars: The Secret History of the CIA, Afghanistan, and Bin Laden,… from BookRags. (c)2022 BookRags, Inc. All rights reserved.