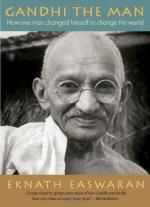 Eknath Easwaran
This set of Lesson Plans consists of approximately 143 pages of tests, essay questions, lessons, and other teaching materials.

2. Easwaran explains that most people see life in terms of what?
(a) People have and do not have.
(b) People have, like, desire, and fear.
(c) People want.
(d) People fear.

3. He was so intimately involved and concerned with the intimate details of the worlds of the people who surrounded him that what happened?
(a) He was unable to keep track of the details.
(b) He could not help everyone.
(c) Not a single detail escaped his notice.
(d) He became overwhelmed.

4. Sri Krishna says that the wise person's love for the Lord of Love does what?
(a) Takes away his need to love.
(b) Has consumed all of his selfishness and preoccupation with pleasing his own senses.
(c) Shows him how to love himself and others.
(d) Gives him love to share with others.

5. Gandhi used what Rambha taught him his whole life, repeating it rhythmically when?
(a) He first wakes in the morning.
(b) As he breathed and walked.
(c) Before he falls asleep at night.
(d) Speaking to others.

6. On what does one who loves the Lord of Love focus?
(a) Giving love to others.
(b) Living in the spirit of love.
(c) Where to find love.
(d) How to love oneself.

7. Kasturbai kept her faith in her husband's character even when what happened?
(a) She did not believe in it.
(b) He did not deserve it.
(c) He did not display it.
(d) He was gone from her.

11. Gandhi described the process as reducing oneself to zero, which is when?
(a) He puts all others before himself.
(b) He becomes completely truthful, wise, and irresistibly powerful.
(c) He puts God first.
(d) He becomes less than others.

13. A united mind is the only mind that is able to meditate and do what?
(a) Understand others.
(b) Find joy and peace.
(c) Find peace and exercise judgment.
(d) Love others fully.

14. When one meditates, one drives what deep into the consciousness?
(a) Fear.
(b) Hatred.
(c) The highest ideals.
(d) Desire.

1. People came burdened and overwhelmed with their troubles, and left how?

2. Gandhi's focus was on letting the wisdom, love, joy and peace he studied make up what?

3. The two of them became what for men and women throughout India?

4. Gandhi saw that Kasturbai was already living what he was studying, and began to do what?

5. What must be driven out of the mind?