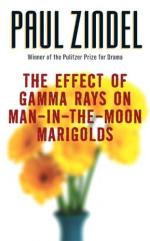 Paul Zindel
This set of Lesson Plans consists of approximately 145 pages of tests, essay questions, lessons, and other teaching materials.

3. Which of the following phrases best characterizes Beatrice's demeanor during the second phone call in Act 2?
(a) Sad and empathetic.
(b) Frightened and shy.
(c) Manic and cruel.
(d) Peaceful and diplomatic.

1. Which character is shown sleeping in Act 2?

2. What is Ruth concerned about before Tillie goes on stage?

3. Who wins at the science fair?

4. What does Tillie offer to do when there is a medical emergency in the home?

5. What sound is heard during Janice Vickery's presentation at the science fair?

The Effects of Gamma Rays on Man-in-the-Moon Marigolds from BookRags. (c)2021 BookRags, Inc. All rights reserved.