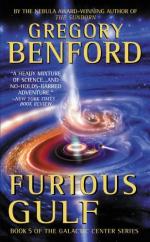 Gregory Benford
This set of Lesson Plans consists of approximately 122 pages of tests, essay questions, lessons, and other teaching materials.

3. What are Killeen's orders at the end of "Besik Bay?"
(a) Go into Besik Bay.
(b) Go into the Shredded Star.
(c) Go into the Cosmic Circle.
(d) Go into the galactic jet.

5. What device does Quath's brethren carry?
(a) The Eternal Web.
(b) The Infinite Sphere.
(c) The Cosmic Circle.
(d) The Galactic Orb.

1. What is Quath doing at the beginning of "The Song of Electrons?"

2. With whom does Toby argue in "Unsettled Movement?"

3. Where is Argo at the beginning of "Deep Reality?"

4. From where/what does Toby tell Quath the judge wants information?

More summaries and resources for teaching or studying Furious Gulf.