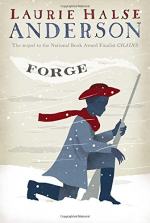 These items are taken by Curzon from the British soldier that Eben kills early in the novel.

Curzon stole these items after his boss Trumbull refused to pay him his wages.

When Curzon loses this object, he cries because it belonged to his father.

This object found in Curzon's knapsack is a symbol of Isabel, to whom it once belonged.

These items in Curzon's knapsack represent the home of Isabel and Curzon before the war.

This symbol in the novel represents extreme poverty and the difficult conditions of the soldiers in the war. It was often the only food they could obtain to eat.

This item symbolizes Curzon's attempt to join the crew of a ship leaving for France.

This pet in Moore Hall lives in the kitchen and belongs to Missus Cook. Symbolically, it represents bondage.

More summaries and resources for teaching or studying Forge.