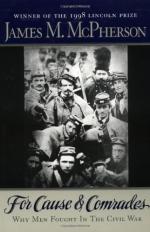 For Cause and Comrades: Why Men Fought in the Civil War Test | Mid-Book Test - Medium

1. During the discussion of good-luck charms and talismans, the author notes that he has not encountered any evidence of Civil War soldiers carrying what common item?
(a) Four leaf clover.
(b) Horseshoe.
(c) Rabbit's foot.
(d) Acorns.

3. As "Chapter 4: If I Flinched I Was Ruined" opens, which of the following is NOT a traditional means of motivating soldiers to fight?
(a) Training.
(b) Leadership.
(c) Money.
(d) Discipline.

4. When McPherson says that grousing about war has long been a soldier's privilege, he notes an officer from which state who wrote that these "soldiers will fight like bull dogs"?
(a) Virginia.
(b) Pennsylvania.
(c) Massachusetts.
(d) Georgia.

1. During the discussion of leadership, a captain in the 1st North Carolina told his daughter ___________ that he would not be a tree dodger.

2. According to "Chapter 4: If I Flinched I Was Ruined," the ultimate test of leadership was what?

3. From which state was the soldier who felt that religion was what made brave soldiers, during the discussion of Civil War faith?

4. During the story of Sarah Rosetta Wakeman, what is the name of the battle in which she fought?

5. An experience at Gaines Mill on June 27, 1862, where the Union line slowly began to leak stragglers, was described by a corporal from which state?

1. During "Chapter 3: Anxious for the Fray," what attitude did the soldiers on both sides have about the upcoming war?

2. What can readers conclude about the use of alcohol as a motivational tool, during "Chapter 4: If I Flinched, I was Ruined"?

3. How did the Calvinist doctrine of predestination factor into soldiers' lives in the discussion of religion?

4. In the discussion of religion, how did Christian soldiers reconcile the war with the commandment to "turn the other cheek"?

5. In the discussion of leadership, what qualities does McPherson say made a good officer?

6. What conclusion is reached about the role of religion as a motivating factor at the end of "Chapter 5: Religion is What Makes Brave Soldiers"?

7. How did the tone of soldiers' letters home change from their initial zeal after the first few battles were over?

8. While discussing "short-timers" psychology, what reason does McPherson give for why this phenomenon did not exist in the Confederate army?

9. Define and explain "rage militaire" as discussed by McPherson in his discussion of the initial impulse that motivated soldiers to fight the Civil War.

10. In the discussion of cowardice, McPherson says that officers were held to even higher standards of bravery. What effect did this expectation have on officers?