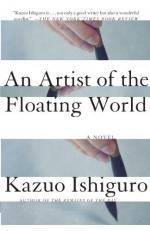 An Artist of the Floating World Test | Mid-Book Test - Easy

Kazuo Ishiguro
This set of Lesson Plans consists of approximately 142 pages of tests, essay questions, lessons, and other teaching materials.

1. What does Ono promise to do to help Mrs. Kawakami?
(a) Visit her new bar when it's built.
(b) Paint advertising posters for her new bar.
(c) Loan her money.
(d) Bring all his friends to her bar.

4. What does the corporation offer Mrs. Kawakami?
(a) To fund remodeling of her business.
(b) To fund an expansion into the adjoining buildings.
(c) To go into partnership with her.
(d) To buy her out for a generous sum.

6. How do the new apartment buildings under construction look to Ono?
(a) They are beautiful.
(b) They are ugly and too modern.
(c) They are a sign of progress.
(d) They could be mistaken for bombed ruins.

7. How does Ono want Noriko to appear during the miai?
(a) Quiet and respectful.
(b) Shy and innocent.
(c) Dignified and silent.
(d) Lively and intelligent.

9. What does Shintaro paint now that the war is over?
(a) Fire engines.
(b) Destroyed buildings.
(c) Anti-war slogans.
(d) Flowers.

10. What is a miai?
(a) A formal meeting between the families of a prospective bride and groom.
(b) An engagement party.
(c) A wedding reception.
(d) A business meeting.

13. Why is Ono surprised that Shintaro has not confided in him?
(a) Ono's recommendation would have been all Shintaro needed.
(b) Shintaro needed Ono's support.
(c) Ono had been his friend and mentor.
(d) Ono could have given Shintaro what he wanted.

14. How does Setsuko make up to Ono for Noriko's excluding him from the outing?
(a) She berates her sister for her rudeness.
(b) She insists that he be invited to come along.
(c) She decides to stay home with him.
(d) She cancels the trip to go to the cinema with him.

15. Why does Ono decide NOT to tell Noriko that he had contacted old acquaintances to try to ensure that her marriage negotiations went well?
(a) He doesn't want to make Noriko even more nervous.
(b) The outcome had been unsatisfactory.
(c) Noriko might become overconfident.
(d) Noriko would be angry if he interfered.

1. According to Suichi, Ichiro's father, why does Ono quit painting?

3. How does Noriko embarrass Ono in front of Mr. Mori?

4. Why does Shintaro not join Ono's other pupils at their reserved table in Migi-Hidari?

5. What does Ono say about the movie that insults Ichiro?