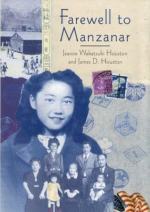 This quiz consists of 5 multiple choice and 5 short answer questions through Chapter 21, The Girl of My Dreams.

1. Why doesn't Papa return to Japan?
(a) He is wanted in Japan for murder
(b) He wants to move to China
(c) The size of his family
(d) His law degree is the United States

2. What does the man at the cannery shout?
(a) The United States is going to war
(b) A submarine is captured in New York
(c) Pearl Harbor is bombed
(d) Hitler is killed

4. What do many Americans fear that all Japanese are doing?
(a) Spying on the United States
(b) Providing information to Germany
(c) Planting bombs in Hawaii
(d) Plotting to kill the president

5. The War Department issues surplus clothing from which war?
(a) WWI
(b) The Vietnam War
(c) The Spanish American War
(d) The Civil War

1. What does Papa want to build?

2. What item does Jeanne's mother refuse to sell, deciding instead to break it?

3. What does Jeanne fear as the camps close?

4. Where does Jeanne find that she is accepted?

5. What does the reservoir crew fear?