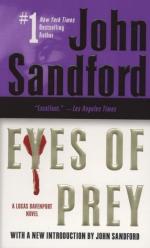 Lucas Davenport is a Minneapolis police detective. He is tall, rugged, with sandy blond hair and a noticeable scar on his face. Currently Lucas is still struggling with depression. His baby, Sarah was recently injured. As a result, the baby and her mother left Lucas. The mother, Jennifer, claimed that Lucas' lifestyle is too dangerous.

2. Detail the scene in which Carlo Druze enters the Bekker house. What is the purpose of Druze's presence?

Carlo Druze lets himself into the garage of the Bekker home, precisely following the instructions given to him by Michael Bekker. Bekker has hired Druze to kill his wife, Stephanie. Druze sneaks up on Stephanie and hits her with a heavy bottle found on the kitchen table. Druze beats Stephanie and then forces the sharp end of the broken glass into Stephanie's eyes. Surprised by the appearance of Stephanie's lover, Druze flees, leaving Stephanie for dead.