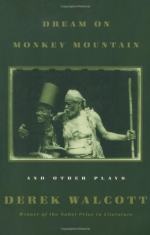 Derek Walcott
This set of Lesson Plans consists of approximately 105 pages of tests, essay questions, lessons, and other teaching materials.

What is so significant about the names of the characters in this story? What do Makak's and Caiphus's names represent? Why would Walcott choose to name his characters these particular things? Ask students to rename the characters in Walcott's story and describe why they chose those names. This activity is intended to be entertaining.

Draw a picture on poster board of what you think the prison looks like based on the narrator's description.

Break students up into groups of five. Have four of them pretend to be Makak, Moustique, Souris, and Tigre, and the fifth student be a therapist leading a group. Have characters bring up their conflicts with other characters to be discussed. After five to ten minutes, ask students to switch roles and act out the part of another character.

Have students research Derek Walcott and ask them to write...