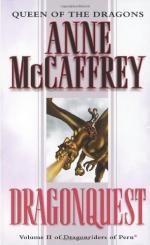 1. What is Lord Groghe having his people do and why? What is he ignoring by doing this but what obligation does he fulfill?

Lord Groghe has every inhabitant planting crops to the detriment of the fire watch. Perhaps in protest against Weyr neglect, he ignores the duty of removing greenery near his habitations, but guards his forest against Thread.

2. What does Robinton think about composing a song about dragons. How are dragons and humans matched and what can dragons do that's so special?

For the gentle dragons, no theme is grand enough. Dragons are impressed at hatching by humans who will ride, tend, love them, and communicate mind-to-mind. Dragons can transfer themselves mysteriously through time and space.

F'nor and his big brown dragon Canth are sleepy from searching for a rider candidate for a golden egg now hardening at Benden Weyr.