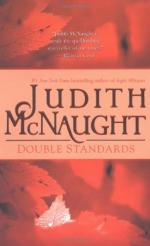 Judith McNaught
This set of Lesson Plans consists of approximately 131 pages of tests, essay questions, lessons, and other teaching materials.

2. Who is Nick's secretary?

3. What does Lauren make clear to Nick that she wants?

4. Who is the Italian with whom Nick is working on a secret project?

5. Who does Lauren tell about her arrangement with Philip?

1. What does Lauren learn about Ericka Moran at the party?

2. In addition to returning the pearl earrings, what choice does Lauren make in spite of Nick's poor behavior?

3. How does Tony prove to be Lauren's only friend at this point?

4. Why has the company's security department decided to conduct an investigation into Lauren's past?

5. What surprises Lauren about a new assignment she gets at the office?

6. How does Jim come to Lauren's aid when Nick begins making advances again?

8. How does Nick try to reconnect with Lauren at the party?

9. What is revealed about Lauren's character by her behavior regarding Nick's advances?

10. What two pieces of information does Nick's lawyer reveal about Lauren?

Create a brief character study of Philip. What does he look like? What are his positive personality traits? What are some of his negative characteristics? What are his hopes and fears? What motivates him--if anything--at this point in his life?

Explain the role of women in business in the late-20th century when the women in the novel are living their lives. What precedents do they feel compelled to follow? What restrictions do the have? What freedoms did they enjoy that 19th-century women did not have?

Explain Lauren's position on premarital sex. Why is her virginity considered such a rarity and source of amusement for Nick? Why is sex such a constant battle between Nick and Lauren?