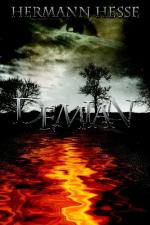 Hermann Hesse
This set of Lesson Plans consists of approximately 97 pages of tests, essay questions, lessons, and other teaching materials.

• Emil Sinclair, a grown man, reflects on his coming of age in the early 1900s.

• His story begins when he is ten-years-old. In an effort to impress neighborhood bully, Franz Kromer, Sinclair invents a story about stealing apples.

• Kromer demands money from Sinclair in return for not saying anything about the apples. Sinclair doesn't have enough money, so Kromer subjects him to stealing and running errands.

• Until he runs afoul of Kromer, Sinclair describes his world as a realm of love and lightness.

• Kromer introduces Sinclair to the forbidden realm of darkness, replete with scandal, drunkards who beat their wives and workmen who tell ghost stories.

• Sinclair wants to be clear-sighted and unspoiled, but he is drawn to the seamier side of life.

• Sinclair is afraid of the effect Kromer is having on him and the growing distance he feels between himself and his family.

More summaries and resources for teaching or studying Demian.