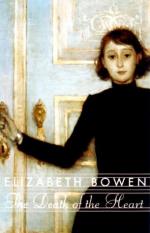 The Death of the Heart Chapter Abstracts for Teachers

Elizabeth Bowen
This set of Lesson Plans consists of approximately 151 pages of tests, essay questions, lessons, and other teaching materials.

• Anna is strolling with St. Quentin and telling him the story of how she accidentally came across the diary of Portia, a girl living with her. Anna is annoyed that she found the diary, but more annoyed by Portia's mere presence. She doesn't know what she can do about it, however, because Portia is her husband Thomas's sister, and is staying with them according to the wishes of Thomas's father, Mr. Quayne.

• Mr. Quayne had been married, but met a woman named Irene in London, and had an affair with her. Upon finding out that Irene was pregnant with Portia, he woke his wife in the middle of the night to confess what he'd done. His wife calmly told him that he must do the right thing and marry Irene, so she filed for divorce.

• Thomas brought his father to...

More summaries and resources for teaching or studying The Death of the Heart.

The Death of the Heart from BookRags. (c)2021 BookRags, Inc. All rights reserved.