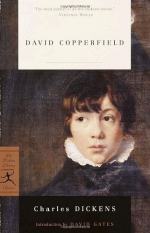 Charles Dickens
This set of Lesson Plans consists of approximately 118 pages of tests, essay questions, lessons, and other teaching materials.

Summary from different point of view

Summarize the novel from Agnes' point of view.

Hold a mock trial for Uriah Heep based on the accusations Mr. Micawber brings against him.

Write a letter to Emily from Ham after she runs off with Steerforth.

Choose your favorite character and present an explanation of the events in the novel from that character's perspective.

In groups of three or four, silently act out a scene from the novel and have the rest of the class guess which scene you chose.

In pairs, act out Ham confronting Steerforth about running away with Emily.

Choose a character and write a poem from that person to another character.

Find another coming of age novel and present it to...

More summaries and resources for teaching or studying David Copperfield.