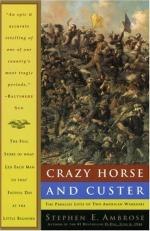 Although the father opposed the romance, this person married a military man and went on campaigns with him.

This person is the son of a local medicine man. The name he is known by is different than the one he was called by people in his early years.

This person is a medicine man and father who appears in the early part of the book.

This person is a prominent Union Army General under whom Custer is happy to serve under.

This person is the General who treats Custer like a son.

This is a famous Sioux leader who led his people in defending the land against the United States Army.

This person is a colonel in command of Fort Phil Kearny.

This man is a captain who was a good soldier during...