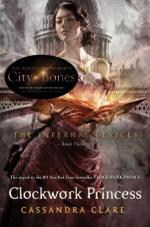 Cassandra Clare
This set of Lesson Plans consists of approximately 151 pages of tests, essay questions, lessons, and other teaching materials.

1. The title of Chapter 13: “The Mind Has Mountains” is an allusion to what poem that is cited in the opening of the chapter by Gerard Manley Hopkins?
(a) “No Worse, There Is None.”
(b) “To a Silent Passing Wave.”
(c) “Elegy for John Keats.”
(d) “Tomorrow’s Shadows and Yesterday’s Years.”

2. Who is in the process of developing a transportation device in Chapter 17: “Only Noble to be Good”?
(a) Tatiana Blackthorn.
(b) Mortmain.
(c) Benedict Lightwood.
(d) Henry Branwell.

3. What creatures attack Will when he is slumped outside of the stable at the inn in Chapter 14: “Parabatai”?
(a) Killer worms.
(b) Vampires.
(c) Werewolves.
(d) Otherworlders.

4. Who saves Will from the automaton when his Seraph blade dissolves outside the inn in Chapter 18: “For This Alone”?
(a) Armaros.
(b) Mortmain.
(c) Tessa Gray.
(d) Balios.

7. To whom does Charlotte Branwell address her letter that concludes Chapter 17: “Only Noble to be Good”?
(a) “Consul Josiah Wayland.”
(b) “Members of the Clave of the Nephilim.”
(c) “Members of the Downworlder Order.”
(d) “Inquisitor Victor Whitelaw.”

8. Cwm Cau is described in Chapter 18: “For This Alone” as a small valley atop the mountain in whose heart rests what clear glacial lake?
(a) Iratze.
(b) Llyn Cau.
(c) Loch Enkeli.
(d) Eremiel.

9. The automaton that accompanies Mortmain in Chapter 18: “For This Alone” says to Tessa, “I fought Johnathan Shadowhunter on the plains of” what location?
(a) “Cair Paravel.”
(b) “Enkeli.”
(c) “Iratze.”
(d) “Brocelind.”

10. To whom is the letter addressed that is written by Charlotte in the opening of Chapter 15: “Stars, Hide Your Fires”?
(a) Josiah Wayland.
(b) Aloysius Starkweather.
(c) Woosley Scott.
(d) Bridget Daly.

11. What does Jem ask Charlotte to bring him when she comes into his room as Sophie leaves in Chapter 13: “The Mind Has Mountains”?
(a) His violin.
(b) His piano.
(c) His cello.
(d) His harp.

12. Charlotte tells Jem in Chapter 13: “The Mind Has Mountains” that Henry is still insisting on naming their unborn child what?
(a) James.
(b) Buford.
(c) Henry.
(d) Gabriel.

14. What novel does Tessa think of while speaking with Mortmain in Chapter 18: “For This Alone,” in which she imagines the characters of Lucie Manette and Sydney Carton?
(a) To Kill A Mockingbird.
(b) A Tale of Two Cities.
(c) Gone With the Wind.
(d) The Merry Wives of Windsor.

1. The sword that is offered to Will by Jem’s uncle in Chapter 24: “The Measure of Love” is inscribed with a name. What is the name on the sword?

2. When Charlotte comes into Jem’s room while Sophie sits by his bed in Chapter 13: “The Mind Has Mountains,” she tells Sophie that “Bridget’s in one of her moods; she says she can’t find” what?

3. When Tessa transforms into the angel in Chapter 21: “Burning Gold,” her skin is said to turn gold and tear apart. From where Tessa’s skin tears, what is said to leak from the wounds?

4. What is the name of the goddess that is depicted on the box that held Jem’s medicine, as revealed by Jem in Chapter 23: “Than Any Evil”?

5. Jem tells Will in Chapter 22: “Thunder in the Trumpet” that his name is no longer James Carstairs but what now?