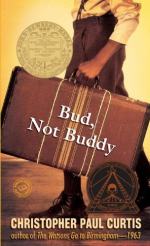 2. What does the band do about Bud's comment that his father is the grumpiest guy in the group?
(a) Let it lie.
(b) Discuss it amongs themselves.
(c) Argue about it.
(d) Correct him.

3. How does Bud decide is the best way to deal with the situation with the stranger he is riding with?
(a) Ask as many questions as he can think of.
(b) Provide as little information as possible.
(c) Pretend he is sleeping.
(d) Tell a lie to all of the questions.

4. How does the man who Bud accepts a ride with introduce himself?
(a) Mr. Calloway.
(b) Lefty Lewis.
(c) Peanut Head.
(d) Scott Lewis.

6. What does Bud find himself daydreaming about in this chapter?
(a) Where he will live when the band travels.
(b) What his mother would think.
(c) What would happen if Miss Thomas adopted him.
(d) Staying with the band permanently.

8. What emotional event happens to Bud during this chapter?
(a) He becomes withrdrawn.
(b) He becomes enraged.
(c) He becomes saddened.
(d) He cries uncontrollably.

13. Which of the following words describes how Bud feels about his first real encounter with the band and their crew?
(a) He is facinated by the roles of the crew.
(b) He cannot figure out what part of the band does what.
(c) He is surprised by how they make the music.
(d) He is mystified by the music.

14. How do Miss Thomas and the band feel about Bud's cleaning?
(a) They are thankful.
(b) They believe he can do better.
(c) It keeps him busy.
(d) They have to redo it too make it satisfactory.

15. Which of the following best describes how Bud feels about Miss Thomas?
(a) Dislikes.
(b) Respectful.
(c) Scornful.
(d) Enamored.

2. What does the front of the box in the car say?

3. How is it revealed that Bud and Mr. Calloway are related?

4. How does the stranger react to the fact that Bud attempted to drive the car without him?

5. What does Bud do in order to escape the supposed vampire?