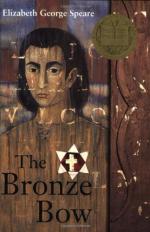 3. Restless on the mountain, what does Daniel want to do?
(a) Go to Capernaum and look for Joel.
(b) Return to the village and check on his grandmother and Leah.
(c) Teach Samson how to speak.
(d) Make more swords for the coming battle.

4. How does Daniel react to the sight of the Roman soldiers?
(a) He thinks about joining them.
(b) He begins to yell curses at them.
(c) He runs for cover.
(d) He starts crying, thinking about his parents.

5. What causes Thacia to change her attitude to Daniel?
(a) He asks her to marry him.
(b) He kisses her.
(c) Joel returns and scolds her severely.
(d) He passes out and she discovers that he is wounded.

6. What does Daniel reflect on about Rosh's business?
(a) It is hard work that goes on every day.
(b) There is nothing to do for days and then they are very busy.
(c) Working for Rosh is never exciting like he had imagined.
(d) Rosh's business is not going well at all.

7. How does Daniel react when the soldier kicks out at him?
(a) He curses the soldier.
(b) He makes a rude gesture.
(c) He slaps the horse and makes it rear up.
(d) He throws the bowl and the water at the Roman's face.

9. What is Simon's message for Daniel?
(a) Amelek is dead and Daniel can return to the village.
(b) The grandmother's house has fallen down.
(c) Daniel's sister will not stop crying for her brother.
(d) Daniel's grandmother is dead.

10. What does Thacia do for Daniel?
(a) Sees that he has a pillow.
(b) Brings medicine and binds his wound.
(c) Sings him to sleep.
(d) Plays music on her harp.

12. How does Daniel finally get back to the cave?
(a) He rests at the foot of the mountain and continues the next morning.
(b) Rosh sends out a patrol to find him.
(c) The sight of Roman soldiers in the valley below make him hurry on.
(d) Samson is waiting for him and carries him to the cave.

14. What password do the four boys select for the army they are forming to take to Rosh?
(a) One for all and all for one.
(b) The bronze bow.
(c) The mountaintop.
(d) Green pastures.

15. How is Samson useful to the camp?
(a) Hauling water and wood.
(b) Cooking.
(c) Rolling rocks down the mountainside.
(d) Standing guard at night.

1. When she comes to the door, how does Thacia react to Daniel?

2. Who comes looking for Daniel?

3. What is Rosh's attitude when Daniel goes to tell him he now has to stay in the village?

5. Why does Joel insist on staying near Daniel when the pack train is coming?