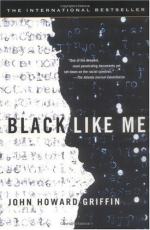 1. What job does the well-dressed black man say he used to have?

2. What profession does the well-dressed black man think Griffin has?

3. What does the custard stand attendant refuse Griffin?

4. What does Griffin give the wife of the young black man?

5. After the well-dressed black man leaves, what is the name of the man who sits next to Griffin?

1. What attitude does Griffin feel most whites in Mobile take towards blacks?

2. How does the man from Massachusetts Griffin meets while hitchhiking feel about people from Mississippi?

3. Why does Griffin decide to go to Mississippi?

4. How does Griffin arrive at the house of his friend, P.D. East?

5. Explain why Griffin thinks white men pick him up while he is hitchhiking.

6. Describe what Griffin sees on the bathroom wall of the bus station.

7. How does the attendant at the custard stand act toward Griffin when Griffin asks to use a restroom?

8. Why is the white man who picks Griffin up at the beginning of the fourth section hypocritical?

10. According to Griffin, how do the blacks automatically act among one another on the bus to Mississippi?

Describe Dr. Martin Luther King, Jr.'s role in the book. Based on your knowledge of Dr. King's role in history and what you have read in the book, explain three things you think the two men would agree upon. Use examples from the text to support your answer. How would the two get along if they ever met?

Explain the ultimate purpose of Griffin's journey, and the steps he accomplishes toward achieving that purpose. Do you think he has accomplished all he has set out to do? Explain your answer using supporting examples from the text.

Choose one of the following major characters and explain their role in the book. How is Griffin affected by this person? How would you characterize this person? Come to a conclusion about how the character advanced the book as a whole. Characters to choose from: Sterling Williams, Christophe, George Levitan, P.D. East.