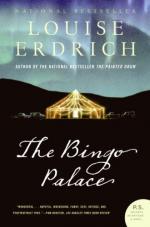 2. What does Zelda say she knew before the dance?
(a) That it would last all night.
(b) That Shawnee would be the hit of the gathering.
(c) That the punch would be strong.
(d) That Lipsha would be there.

3. What did Shawnee's mother do after her father died?
(a) Forced Shawnee to get married.
(b) Moved away from the reservation.
(c) Admitted that she was having an affair.
(d) Found a job in the city.

5. What does Albertine say she sought in school?
(a) Exhaustion.
(b) Recreation.
(c) Education.
(d) Money.

1. Where does Albertine search through her family's records?

2. Where is Lulu going in the beginning of Chapter 1?

3. Whom does Albertine recognize in the documentary?

5. What does Lipsha do in the middle of his job hunt?