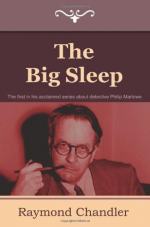 Raymond Chandler
This set of Lesson Plans consists of approximately 97 pages of tests, essay questions, lessons, and other teaching materials.

Joe Brody - He is a small-time hood who was once involved with Carmen Sternwood. Her father paid him to stop seeing his daughter.

Lash Canino - He is a cold and ruthless hit man who wears brown clothes and a brown hat and drives a brown car.

Larry Cobb - He is a drunk and Vivian Regan's escort at the Cypress Club.

Captain Cronjager - He is described as a "a hatchet-faced man." He is angry with Marlowe for not reporting the murders earlier and the two of them argue.

Arthur Gwynn Geiger - A middle-aged "fattish" man with a Charlie Chan mustache who is shot dead while taking photographs.

Mona Grant - She is hiding outside of town so that the police will think that she has run away. Initially, she is naive and gullible, refusing to believe that Mars kills people.

More summaries and resources for teaching or studying The Big Sleep.