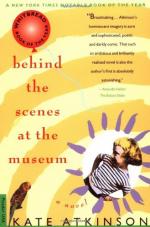 Behind the Scenes at the Museum Test | Final Test - Medium

Kate Atkinson
This set of Lesson Plans consists of approximately 126 pages of tests, essay questions, lessons, and other teaching materials.

2. What job do Ruby and Kathleen have during the summer after high school?

3. What business does George open when the Shop is remodeled?

4. What part of Edmund is wounded?

5. Which of these foods is not part of the Scottish holiday breakfast?

2. How do Kathleen and Ruby spend the summer after finishing high school?

3. What is the reaction Patricia and Ruby have to seeing Gillian's headstone?

4. What does Bunty come into the shop with at the beginning of Chapter Ten?

5. How did Alice and Jean-Paul Armand get stuck in France longer than originally planned?

7. What is Ruby's "reward" for her morning minding the pet Shop by herself?

8. What does Ruby witness on Easter Sunday?

9. Why did the crew of D for Dog have a bad feeling about their final flight?

10. What is different about the birthday party Ruby has in Chapter Eight?

More summaries and resources for teaching or studying Behind the Scenes at the Museum.

Behind the Scenes at the Museum from BookRags. (c)2022 BookRags, Inc. All rights reserved.