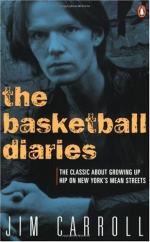 Jim Carroll
This set of Lesson Plans consists of approximately 108 pages of tests, essay questions, lessons, and other teaching materials.

2. Why does Jim get three raps across the hand at school?
(a) For talking back to a teacher.
(b) For throwing bricks.
(c) For putting his elbows on the table at lunch.
(d) For getting a D for effort.

3. What substance does Jim try that he thinks is non-addictive?
(a) Marijuana.
(b) Heroin.
(c) Speed.
(d) Aspirin.

6. What does the newspaper call Jim and his friends?
(a) The Bad-Off Junkies.
(b) The Basketball Gang.
(c) The Boys Club.
(d) The Diaper Bandits.

8. What does the old lady on the bus tell Jim will happen in a month?
(a) She will see her grandchildren.
(b) He will fall in love.
(c) The war will end.
(d) He will die.

9. Why does someone run for Brother Kenneth during Billy's seizure?
(a) He is used to handling them.
(b) He will say a prayer for him.
(c) He is related to Billy.
(d) He is the school nurse.

10. What do Jim and his team want to do after their victory at Riverdale?
(a) Break into an ice cream shop.
(b) Play a prank on Riverdale.
(c) Start a fight with some Riverdale fans.
(d) Get drunk, do reefer, and sniff glue.

13. What does Jim say the "old cigar chomping Garden regulars" love to see?
(a) Over time.
(b) Bill Russell have a bad game.
(c) Players foul out of the game.
(d) Fights break out in the stands.

1. Why does Jim call Chris the "spiller"?

2. What fake name does Brian give when he purchases codeine?

3. What does Jim bring on the train uptown to break his boredom?

4. What does Melody say about marijuana users?

5. What do Jim and friends call the huge rock they jump off of in the Bronx?

More summaries and resources for teaching or studying The Basketball Diaries.