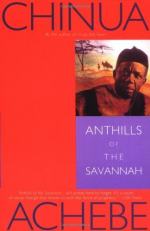 1. Which best describes Ikem's apparent attitude toward women, as explained by Chris in Chapter 5?
(a) They are beneath men and should be treated as such.
(b) They are the equals of men, according to his Marxist philosophy.
(c) They should be held on a pedestal and treated like princesses.
(d) They are there only to comfort him, but are not good intellectual partners.

2. What is the former career of Professor Okong, the Commissioner for Home Affairs?
(a) Newspaper editor.
(b) Lawyer.
(c) Army officer.
(d) Baptist minister.

3. What is Sam's great talent?
(a) He is a talented military strategist.
(b) He is an accomplished classical pianist.
(c) He is basically an actor with a great sense of theater.
(d) He is extremely clever at manipulating people.

4. In Chapter 3, who does Ikem say must be overthrown?
(a) The King of Misinformation.
(b) The Messenger of the Creator.
(c) The wild Sun of April.
(d) The Brigadier of Misfortune.

5. The fight between the President and the people of Abazon is likened to the struggle between which two animals?
(a) The lion and the mouse.
(b) The leopard and the tortoise.
(c) The fox and the rabbit.
(d) The elephant and the flea.

6. Who is the President warned may be plotting against him?
(a) Chris Oriko and Ikem Osodi.
(b) Professor Okong.
(c) The Attorney-General.
(d) Major Johnson Ossai.

8. Which best describes the Commissioners' attitude toward the President as shown throughout Chapter 1?
(a) Fear.
(b) Worship.
(c) Hatred.
(d) Respect.

9. What does the President claim to be?
(a) A career politician.
(b) A law expert.
(c) A common civilian.
(d) A simple soldier.

10. Who does the Attorney-General say may not be one hundred percent behind the President?
(a) Professor Okong.
(b) Major Johnson Ossai.
(c) Chris Oriko.
(d) Ikem Osodi.

12. To which character from literature does Beatrice compare the American woman, Lou Cranford?
(a) Aisha.
(b) Desdemona.
(c) Medusa.
(d) Jezebel.

14. What is a crime problem in the city now, much feared by Elewa?
(a) Rape.
(b) Armed robberies.
(c) Political killings.
(d) Spousal abuse.

15. What is the meaning of Beatrice's given name, Nwanyibuife?
(a) A female is also something.
(b) A female is nothing.
(c) African beauty.
(d) African warrior.

1. What is happening outside as the President holds a meeting with his cabinet?

2. To what does Ikem compose a hymn?

3. According to Ikem, which is the biggest single group of oppressed people in the world?

4. On what pretext does a police constable detain Ikem as he leaves the meeting at the end of Chapter 9?

5. What happens when Ikem goes to complain about the police constable's conduct?