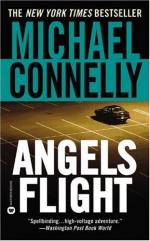 Michael Connelly
This set of Lesson Plans consists of approximately 121 pages of tests, essay questions, lessons, and other teaching materials.

1. Who calls Harry while he is waiting for his wife to come home in Chapter 1?

2. How many partners does Harry have professionally?

3. Where does Harry have to report to investigate the murder in Chapter 1?

4. In Chapter 1, what type of police officers are swarming the scene?

5. What is Harry's initial response when he first visits the murder scene?

That it is not normal.

He sued the police.

7. Where was Howard Elias supposed to report the Monday following his murder?