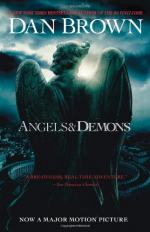 1. What does Langdon hear shortly after the bells chime at St. Peter's Square?
(a) A maniacal laugh.
(b) An evil chanting.
(c) A child screaming.
(d) A siren wailing.

2. What does Langdon see on the television as he leaves the Vatican Archives for the second time?
(a) A threatening message from the Hassassin.
(b) A false report that the new pope has been chosen.
(c) An evacuation warning for all those in the Vatican.
(d) The footage of the second cardinal being murdered.

3. Where does Langdon shoot the Hassassin after the fourth Cardinal is killed?
(a) His hand.
(b) His foot.
(c) His shoulder.
(d) His knee.

4. What does Vittoria do when she sees Langdon alive after his fall?
(a) Cries.
(b) Kisses him.
(c) Slaps him for worrying her.
(d) Faints.

5. Who took the Camerlengo in after his mother was killed?
(a) A cardinal.
(b) An orphanage of nuns.
(c) An Illuminati general.
(d) A kind bishop.

1. Why does the Hassassin leave Langdon in the pool while he is still alive?

2. What is the fire at the burning church put out with?

3. How long did the Camerlengo reign as Pope before his death?

4. What did Langdon use as a parachute when he jumped from the helicopter?

5. How many churches could possibly hold the third Altar of Science?

1. Where does Langdon land after falling from the helicopter?

2. How does Langdon escape from the Vatican Archives when he is locked in as the power is shut off?

3. What happens with Langdon and Vittoria at the end of the book?

4. How does the Hassassin die?

5. What does Kohler tell Vittoria when he calls her as she is rushing to the third Altar of Science?

6. What happens when Vittoria tries to give the second cardinal mouth-to-mouth?

7. How does Kohler think his experience at the Vatican will end?

8. What does the Camerlengo say when Langdon first tries to jump in the helicopter with him?

9. Why did the Camerlengo devise such a horrible plan?

10. What is Kohler doing as Langdon is trying to escape from the overturned sarcophagus?