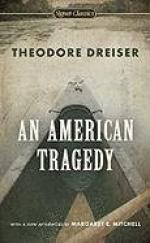 Theodore Dreiser
This set of Lesson Plans consists of approximately 110 pages of tests, essay questions, lessons, and other teaching materials.

Asa, the father, is a fifty-year old man preaching the gospel to strangers on the city streets. His wife, though plain in appearance, is the only one in the family whose personality has any real strength. She spreads the Christian message and encourages the crowd to join in the singing. The daughter, Esta Griffith is fifteen, and her responsibility is to play a small, portable pump organ.

2. What impression does Clyde give to the onlookers?

Clyde is forced to come to the services, but it is obvious to anyone watching that he does not want to be there. He does not join in the proclamations of God's love and avoids eye contact.

3. How does Clyde's life change when he finds the job at the hotel?

Clyde gets a haircut so his appearance is improved and plans to tell his family that he won't be coming home since he will live at the hotel. He is excited at being economically independent, but doesn't tell his family how much he will be earning as he doesn't want them to share it.