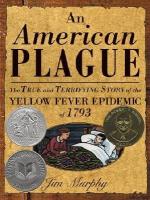 An American Plague: The True and Terrifying Story of the Yellow Fever Epidemic of 1793 Test | Mid-Book Test - Medium

Jim Murphy
This set of Lesson Plans consists of approximately 108 pages of tests, essay questions, lessons, and other teaching materials.

1. How long had medical professionals believed that disease was caused by body humors being out of balance?

3. In 1793, what percent of Philadelphia's black worked as live-in domestic workers?

5. What did doctors give Catherine LeMaigre to cool her fever?

2. Why did the members of the Pennsylvania legislature become fearful two days after they began meeting at the statehouse?

3. What did Dr. Benjamin Duffield recommend be done to deal with the fever?

4. Why did blacks stop worshiping at St. George Methodist Church?

5. What did most doctors in Philadelphia believe caused the sickness?

6. What type of power did the mayor of Philadelphia have?

8. What did the volunteers from the Free African Society often find when they entered the homes of fever victims?

9. Why was the Free African Society founded?

10. What type of medical training did Dr. Benjamin Rush have?