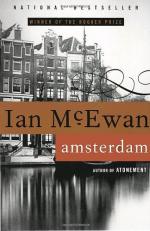 Ian McEwan
This set of Lesson Plans consists of approximately 100 pages of tests, essay questions, lessons, and other teaching materials.

• Molly Lane dies, leaving behind George, her greedy husband, and a trail of lovers.
• Clive and Vernon are Molly's former lovers and great friends who share a dislike for Molly's other former lover, Julian.
• Clive is commissioned to write the Millenial Symphony.
• Clive believes that Molly dies a humiliating death because she has a terminal disease that causes her to die slowly.

• Vernon, a newspaper editor for The Judge, gets a call from George during a meeting and George has information to give him.
• An article is featured in The Judge about a medical scandal in The Netherlands regarding the misuse of euthanasia for murder.
• Vernon visits Clive, who asks him to euthanize him if he ever becomes terminally ill. Vernon later agrees to the same thing.
• Vernon visits George and obtains three scandalous photographs of Julian that he plans to publish in The Judge.

More summaries and resources for teaching or studying Amsterdam.