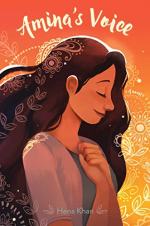 Khan, Hena
This set of Lesson Plans consists of approximately 164 pages of tests, essay questions, lessons, and other teaching materials.

• The following version of this book was used to create this Lesson Plan: Khan, Hena. Amina’s Voice. Salaam Reads, 2017.

• Amina Khokar and her best friend, Soojin, are in music class as the novel opens, and Soojin urges Amina to volunteer for a solo singing part. Soojin is the only one who knows Amina can sing and Amina is afraid to speak or sing in public.

• Soojin's family is about to become American citizens and Soojin is exploring the idea of new names she might choose for herself. Amina hates the idea of Soojin changing her name, feeling that it will change a fundamental part of who she is. Soojin hates that everyone mispronounces her name but Amina feels that is an element of their friendship.

• A girl named Emily joins the conversation, encouraging Soojin's idea. Emily had been a bully to Amina and Soojin in...

More summaries and resources for teaching or studying Amina's Voice.