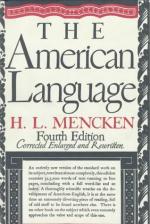 1. What language did "ambassador," "ancestor," and "bachelor" come into English from?

2. Which adjectival prefix does Mencken state is confined to the more sophisticated classes?

3. In what part of the country did the Irish attain to a "truly impressive political power before the first native-born generation of them had grown up" as Mencken states in Chapter 10.1?

4. What is the name of the professor who advocates the assimilation and alteration of the spelling and accentuation of foreign words?

5. What leads most of the studies of the sounds of the American common speech astray, according to Mencken in Chapter 9.10?

Write an essay analyzing the nature of the relationship between the "melting pot" of American immigrant assimilation and the nomenclature that permeates the country. What are the evident influences of foreign languages on American names? How are these names Americanized? What is the general tendency of American-speakers in the employment and application of names to places and people? To what degree are the various names Americanized? What is the cause of Americanization of names? What is its result and what does it indicate about the American spirit?

An important distinction, which Mencken makes in discussing the nature of the American language, is between the proper speech of literate Americans and the common speech of what he calls the proletariat. Write an essay discussing this distinction and its ultimate significance. According to what Mencken has written, is there a genuine distinction between the two? Which of the two does Mencken appear to favor? What are the strengths and weaknesses of each, the proper and the improper, the formal and the informal? What arguments may be made in defense of each?

An implicit premise throughout Mencken's work is that of the influence the overall national character and spirit has on the formation of a language. Write an essay discussing and analyzing the possibility and evidence of this connection. What are the national characters of Americans and Englishmen? How is this shown in their languages? What influence do these character traits have on linguistic formulations and habits of the people? What are some specific examples by which this influence can be seen? What is the ultimate significance of this connection?

More summaries and resources for teaching or studying The American Language.