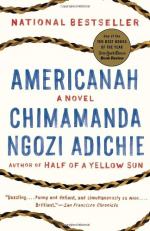 Related Topics
Half of a Yellow Sun
The Thing Around Your Neck
We Should All Be Feminists
Dear Ijeawele, or A Feminist Manifesto in Fifteen Suggestions
Zikora: A Short Story
Apollo
The Arrangements
A Private Experience
Notes on Grief

This character is the female protagonist of the novel. She is a Nigerian woman who moves to America to continue her education there.

This character is the male protagonist of the novel. He is a Nigerian man who goes to England and lives there illegally before being deported.

This character is a bright woman who aspires to be a doctor. She enters into a relationship with a wealthy government official, who is married. She immigrates to America after the death of her lover and works three jobs while going to medical school.

This relative of the female protagonist immigrates to America with his mother when he is a year old. He grows up without a sense of identity, which causes him to become depressed and attempt suicide.

This character is a wealthy white boyfriend to the female protagonist in America. He is responsible...