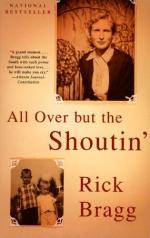 All Over but the Shoutin' Test | Final Test - Medium

1. What happened to Jean-Bertrand Aristide in 1990?
(a) He was assassinated.
(b) He went into exile.
(c) He was elected for the second time.
(d) He lost the election by poplular vote.

2. What are the cemeteries like in Haiti?
(a) So full the caretakers don't know where they put people.
(b) Guarded as no one is allowed in.
(c) Empty because they burn the bodies.
(d) Well kept as life is sacred.

4. What does perfume on a hog reference to in the chapter of that title?
(a) Harvard and Rick.
(b) The North and the South.
(c) Educated and Uneducated.
(d) Rich and Poor.

5. To what does the title "Monsters" refer?
(a) Insensitive journalists.
(b) The Oklahoma city bombers.
(c) Burning houses.
(d) Poverty.

1. Who picked out momma's new house?

2. How did Sam feel about Rick going off to his Fellowship?

3. Why did Rick lose his job at the Birmingham paper?

4. What did Sam wear to his grandmother's funeral?

5. What did Louis Bolivar make seven days a week in Haiti?

1. What gifts did Rick give his mother after he became a successful journalist, and what gift did he want to give his mother? How did he feel about these gifts?

2. Who died at home, and when Rick went to the funeral how did he feel?

3. Why didn't Rick remain married to his young bride?

4. How did Mark's life affect momma and why?

5. How did Rick feel about the Fellowship to Harvard and why? How did his family feel?

7. Why did Rick question his feelings about being a reporter after the Oklahoma City bombings?

8. How did Rick fare at Harvard?

9. Why did Rick never drink alone?

10. At Thanksgiving in the new house, what did Rick and Sam learn?