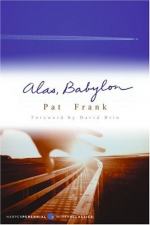 Pat Frank
This set of Lesson Plans consists of approximately 135 pages of tests, essay questions, lessons, and other teaching materials.

She is a spinster and manages Western Union in Fort Repose, Florida.

She is the librarian and a friend of the main character.

He is the main character's neighbor who surveys the neighbors' yards with binoculars in the evenings and mornings.

He is pastor emeritus of the Afro-Repose Baptist Church.

He is Randy Bragg's brother in the Air Force SAC Intelligence.

He is Deputy Director of Civil Defense for the county.

He is a squadron commander at McCoy.

He is a son of the founder and president of the First National Bank in Fort Repose.

He owns and manages the Ajax Super-Market.

He runs a bar, short-order grill, package store and fish camp at the edge of town.

He is Randy's gardener and helper.