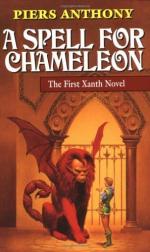 1. What is situational magic?

Situational magic is a spell on a particular object or place to make it seem more than it is. Lookout Rock is such a place, as viewers on the rock can see more of Xanth than they should be able to, considering that the rock isn't actually high enough to give such a vantage point.

2. What is Bink's motivation to seek out the Good Magician Humphrey?

Bink's motivation for seeking out the Good Magician Humphrey is to find his talent, or to ascertain if he has one at all. The reason this is such an issue is because without a magic talent past his twenty-fifth birthday, he is exiled the land of no magic beyond Xanth's borders, as every citizen of Xanth must possess a magic talent. He wants to stay in Xanth not only because it is his home, but because he has a girlfriend, Sabrina in Xanth as well.

A Spell for Chameleon from BookRags. (c)2022 BookRags, Inc. All rights reserved.