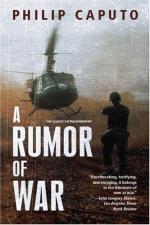 Philip Caputo
This set of Lesson Plans consists of approximately 149 pages of tests, essay questions, lessons, and other teaching materials.

3. At night on the line, what does everything look like?
(a) Various shades of black
(b) Like a scary movie set
(c) Phosphorescent
(d) Like VC soldier marching toward the line

6. Who never looks up as they cross the muddy paddies?
(a) A water buffalo
(b) Three Vietnamese girls planting rice
(c) Some boys catching frogs
(d) An old farmer

7. From the ridge where they are located, why can the platoon not fire mortars at the VC?
(a) The men with mortars were all KIA.
(b) The mortars are frozen up.
(c) They are out of range.
(d) They cannot fire off of a slope.

8. What is the name of the operation C Company is waiting to begin?
(a) Operation Long Lance
(b) Operation Ha Na
(c) Operation Skyhawk
(d) Operation Mountain Storm

10. How does Caputo classify Gen. Westmoreland?
(a) As a fighting man
(b) As a businessman
(c) As a public relations man
(d) As a figure head

11. Why is an artillery attack denied when a patrol advancing to the base is spotted?
(a) The higher commanders do not believe the report.
(b) A Marine patrol is lost out in the same area.
(c) New artillery ammunitions has not arrived.
(d) No one has the exact coordinates.

12. What begins happening at night at the Danang base?
(a) VC begins a series of night sniper attacks on the base.
(b) The Chaplain begins holding midnight masses.
(c) Marines are shown movies in the mess tent.
(d) The monsoon rains stop at night.

13. What do they do so that the VC corpses will not look recently uninterred?
(a) Hose them down
(b) Strip off their uniforms
(c) Throw loose dust on them
(d) Brush the dirt off

14. What does a cynic say about the Navy Crosses Corporal Gautier has won?
(a) Who needs medals; give him a discharge.
(b) They will make nice wall decorations at home.
(c) They are not real. It is all a big publicity stunt.
(d) The gold one they pin on you and the wooden one they put over you.

15. What happens to Caputo as he is crawling on his stomach to get back to his men?
(a) He comes under heavy fire and dust is kicked up in his face.
(b) He gets hit in the arm but keeps going.
(c) He crawls up on a VC corpse.
(d) He falls into a trap and has to wait for rescue.

1. What does GSW stand for?

2. How much of the base does Caputo say has escaped the damage?

3. Why are Caputo and the rest of the men so exhausted?

4. In reality, how much time per day does the adjutant work require?

5. What warning does Caputo receive after the destruction at Ha Na?

More summaries and resources for teaching or studying A Rumor of War.

A Rumor of War from BookRags. (c)2020 BookRags, Inc. All rights reserved.