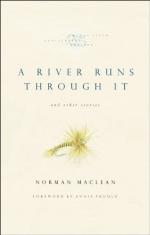 A River Runs Through It Test | Mid-Book Test - Medium

Norman Maclean
This set of Lesson Plans consists of approximately 114 pages of tests, essay questions, lessons, and other teaching materials.

1. What does Norman do after he takes Paul and his girlfriend back to Paul's house?
(a) He goes to his own home.
(b) He berates Paul for bad behavior.
(c) He goes out to get food to fix breakfast for all of them
(d) He fixes a pot of coffee.

2. What happens to humiliate Paul?
(a) He is rejected by a woman in a bar.
(b) He has to be bailed out of jail by Norman.
(c) He does not have enough money to pay his bar tab.
(d) He falls down outside a bar.

3. What does Paul hope to avoid?
(a) Any confrontation from Norman about Paul's behavior the last time they were together
(b) A sunburn
(c) Any interaction with Jessie
(d) Insect bites

4. Instead of returning to the cabin, where do Norman and Paul spend the night?
(a) At a bed and breakfast
(b) At a Holiday Inn
(c) At a roadside park
(d) At their parents' home

1. How does Norman get the news?

2. Who arrives at the train station a few days later?

4. How is Old Rawhide dressed when Norman and Paul drop her off in town?

5. What happens in the middle of the night?

1. On what is the story based?

2. What is the occupation of Norman and Paul's father?

3. Where do Norman and Paul escape from Norman's family problems a few days later?

4. What is Norman's reaction to the phone call?

5. Neal declares that he wants to fish but what does he do instead?

6. What do Norman and Paul receive in the form of sermons from their father?

7. Why does Paul try to avoid Norman?

8. Which of the two brothers is the better fisherman?

9. What do Norman's wife and mother-in-law finally realize about Neal?

10. What do Norman and Paul find when they return to the spot where they left the car?

More summaries and resources for teaching or studying A River Runs Through It.

A River Runs Through It from BookRags. (c)2022 BookRags, Inc. All rights reserved.