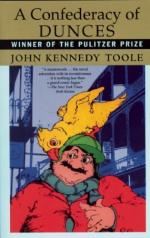 A Confederacy of Dunces Fun Activities

Plan Your Own Film

In groups of five, plan out how you would make Confederacy of Dunces into a film. What actors would you cast in each role? To whom would you want the film to appeal? How would you advertise the film? Be prepared to present your plan to the rest of the class.

Design a front cover for the book including a blurb.

Ignatius suffers from Elephantitis. Find out about the disease and write a list of its main symptoms.

Choose a philosophy that you think you would like to follow. Be prepared to explain your choice.

Divide your class into two and ask each group to devise a political party based on how the classroom should be run. Once each group has developed their idea conduct a debate a debate between the two groups.

More summaries and resources for teaching or studying A Confederacy of Dunces.

A Confederacy of Dunces from BookRags. (c)2020 BookRags, Inc. All rights reserved.