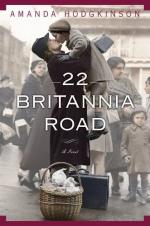 Amanda Hodgkinson
This set of Lesson Plans consists of approximately 125 pages of tests, essay questions, lessons, and other teaching materials.

This person is a young Polish woman whose life changed when she became pregnant and married her boyfriend.

This person is on a train with his unit when the train is attacked and stays in a dead woman's cottage before being found by two Polish soldiers.

This person is abandoned during infancy and is seen as a good luck charm.

This person is ill and dies when a woman carrying him was shot and killed.

This person falls in love with a woman who reminds him of his dead wife.

This person is chubby during childhood and it seems like he and another boy are each other's only friends.

This person cares for someone who becomes ill with sun poisoning and ends up falling in love with him.

More summaries and resources for teaching or studying 22 Britannia Road.