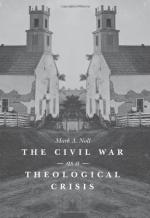 This Study Guide consists of approximately 69 pages of chapter summaries, quotes, character analysis, themes, and more - everything you need to sharpen your knowledge of Civil War and Reconstruction 1850-1877.

During the decade before the Civil War three-quarters of southern whites did not own slaves, and 72 percent of those who did owned fewer than ten. In fact, half of the slave owners in the South had fewer than five. More than half of the nearly four million slaves in the South lived on plantations with more than twenty slaves. Approximately one-fourth lived among fifty or more slaves.

The slaves' experiences varied greatly according to where they lived, the sort of labor they were expected to perform, and the kind of masters they had. Slaves in South Carolina, Georgia, Louisiana, and Mississippi often lived on big plantations where blacks vastly outnumbered whites. These slaves were part of large work gangs that tended large-scale cash crops such as cotton, tobacco, sugar, and rice. In the Upper South and the...

Civil War and Reconstruction 1850-1877: Lifestyles, Social Trends, and Fashion from Gale. ©2005-2006 Thomson Gale, a part of the Thomson Corporation. All rights reserved.